You’ve got to be made of some hardy stuff to call this home.

Snow. Sleet. Frigid temps. Searing heat. These are some of the extreme climates from around the globe. And while an August in Seoul can sometimes feel like it pushes the limits of human tolerance (seriously, try walking to the subway in heels and office wear in sheets of rain and 100% humidity and 90+ degrees), we human beings don’t know what’s it’s really like to survive in a harsh environment.

But for the prickly pear, the iceplant, the chaga mushroom, and the lotus, some of the most extreme climates in the world are called home. And if these botanicals can survive and rejuvenate in those environs, imagine what they can do for our skin in the frigid, almost unbearable surroundings we call the corporate office in the summertime.

The Sahara prickly pear cactus stands front and center in Glow Recipe’s latest curation, Huxley. The brand’s philosophy says it all: Great things never came from comfort zones. And the Moroccan Sahara, which this cactus calls home, is definitely no walk in the park.

From temps that soar over 122 degrees Fahrenheit at its apex, to the frigid nighttime air, from periods of extreme drought to torturous desert winds, the prickly pear cactus is the definition of survival. To adapt to its environment, its “leaves” have formed into sharp spikes, and its roots stretch deep below the desert to efficiently store water.

Morocco’s Berber women have long used the oil of the prickly pear cactus as a moisturizing, anti-aging secret (and that’s some high praise, since the Berber have lived in the Sahara for millennia). Not only does the antioxidant-rich cactus contain all sorts of amino acids, tocopherol (it has 400 times the vitamin E of olive oil), omega-6 and -9 fatty acids, linoleic acid, flavonoids, and beta-carotene, it’s an anti-inflammatory, the first contributor to aging.

Huxley harnesses all this power in its gorgeously minimalist skin care line. To gather just one liter of the prickly pear extract, it takes them 36 hours and a million seeds. Even better, Huxley is certified by Ecocert, the European designation for sustainable development, so you can do good for the environment while treating your skin.

Contrary to what its name suggests the iceplant is a hardy, low-maintenance succulent that thrives in very dry, very hot environments like South Africa. (The iceplant actually gets its name from the purported ice-like shimmering from the bladder-like hairs on its leaves.) It prefers rocky terrains to oversaturated soils, and some species of iceplant can even survive in minus 20 degrees Fahrenheit. The iceplant is excellent at storing water — it only absorbs carbon dioxide at night, allowing them to store more water than other plants — and its high salt content allows it to bind moisture from the air. It’s such a survivor, it’s even considered an “invasive” species in some parts of the world, overwhelming the local flora.

Iceplant has been found to be rich in substances similar to natural moisturizing factors (NMF) found in human skin, which makes it amazing for dry skin. It’s also full of vitamins A, B, and C, magnesium, and amino acids. All this, plus antiseptic and astringent properties, means that iceplant is excellent for hydration but especially for acne-prone and sensitive skin. Try this survivor ingredient in Blithe Crystal Iceplant Pressed Serum. 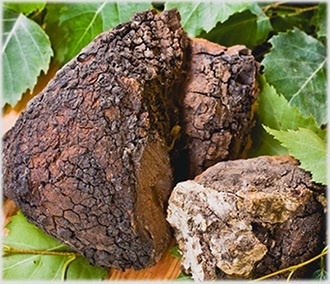 The chaga mushroom may not be exactly pretty to look at it (but then neither are truffle mushrooms), but their superfood status makes them a superstar for skin care. As hard as wood and found on fungus-infected birch trees in cold climates, the chaga mushroom has long been prized in Asia for its immune-boosting powers. It’s rich in beta-D-glucans, various B vitamins, flavonoids, minerals and enzymes, and has an especially high amount of the super-antioxidant superoxide dismutase (SOD). It also has antimicrobial and antiviral properties — there’s a reason the Siberians call it the “mushroom of immortality.”

Chaga is praised throughout Asia for its medicinal properties and is a popular tea. Here in the States, our skin can benefit from chaga’s soothing, anti-aging powers in Blithe Tundra Chaga Pressed Serum, which is comprised of 60% chaga mushroom extract.

Perhaps the most recognizable of the survivor botanicals, the lotus was seemingly built for survival. It blooms in the muddiest of waters, its leaves repel dirt and water, and the coating of its fruit is covered with antibiotics to protect the seed inside. So powerful are its rejuvenation properties, a lotus seed can germinate after centuries of lying dormant. To preserve itself, the flowers close and sink under the water at night and open again at first light, and it goes into a hibernation of sorts in winter, surviving through freezing temperatures.

Long prized in Asia as a tea, the flowers, seeds, leaves and roots of the lotus are edible and often used for medicinal purposes. In India, the lotus is a mainstay in ayurvedic medicine, used to soothe and condition the skin, and lotus flower extract is increasingly being used in skin care, like in K-beauty brands Yuri Pibu and The Lotus. After all, the lotus is rich in antioxidants, flavonoids, fatty acids, proteins, vitamins and minerals, all of which help repair and protect the skin barrier. It also contains natural AHAs, which help cell turnover. And studies have shown the extract of the lotus seed to have anti-inflammatory and antioxidant properties, as well as a potent anti-aging enzyme that helps repair age-damaged protein.

Yet it’s clear we have yet to scratch the surface on the potent anti-aging potential of the botanical. Scientists have recently sequenced the lotus’s genome in an effort to analyze its apparent ability to repair genetic defects. (They’ve been able to get lotus seeds as old as 1,300 years to germinate.) The next step would be to figure out which genes contribute to longevity and repairing genetic damage, and then apply that to human aging.

Because sure, living longer would be great, but a botanical that can make you look 20 when you’re 110? Now that’s worth living for.