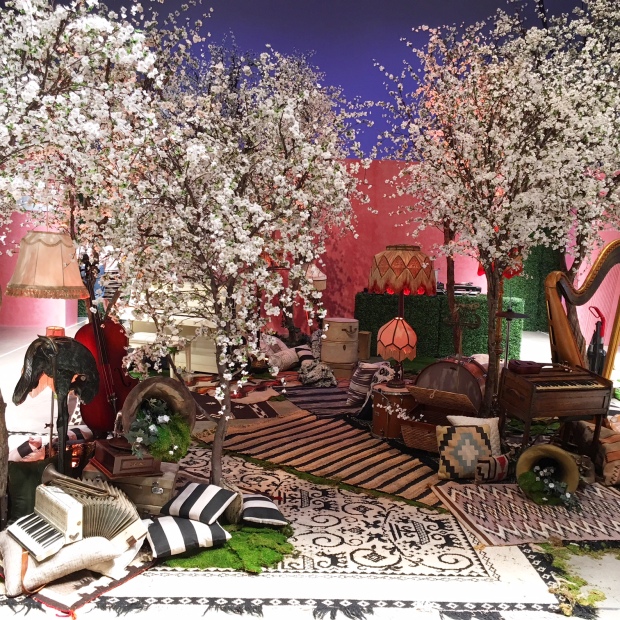 Following a trend that’s not going anywhere anytime soon, cool-girl fashion brand alice + olivia by Stacy Bendet, in partnership with Neiman Marcus, held a fashion show in a see-now-buy-now format, complete with a pop-up shop where guests could buy the looks straight off the runway. The show focused on a festival theme, with the highly anticipated alice + olivia x Grateful Dead capsule collection paired with limited edition items from the spring collection.

Held at NeueHouse Hollywood in Los Angeles on April 13, the star-studded event boasted guests ranging from and many, many more. Equally dazzling as the guest list were the clothes coming down a set reminiscent of a midsummer night’s dream-meets-’60s hippie commune, complete with vintage white piano. Brilliant beading and intricate embroidery were offset by devil-may-care straw hats. A faded denim jacket emblazoned with a mish-mosh of patches balanced a ballgown graphic striped skirt. A whimsical teddy bear print, part of the alice + olivia x Grateful Dead capsule collection, added a jolt of fun. And a plethora of off-shoulder details and of-the-moment slip dresses were buy-now crowd pleasers. With the sound stylings of The Dolls and Ana Calderon adding to the atmosphere, it was almost like being at Coachella, minus the heat and dust.

Of course, backstage before the show, it was a slightly less calming scene. Makeup artists, hair stylists, manicurists and a bevy of editors, writers and photographers were vying for space as the controlled, behind-the-scenes chaos lent an electricity to the air. The only ones who really looked Zen, frankly, were the towering models, each a reflection of that Coachella girl everyone wants to be — fresh-faced, dewy but with a graphic edge.

Ivan Castro, Director of Artistry and Education for Le Métier de Beauté (above), says he received clear direction from designer Stacy Bendet on the makeup look for the models. In fact, “if you see the way Stacy wears her makeup,” he says, “I think this was very much inspired by that girl.”

The focus was on the eyes, with a pitch black, graphic eye using Le Métier de Beauté Dualistic Waterproof Gel Eyeliner in Onyx and Precision Liquid Liner in black, applied all the way up the lid and under the eye. “It’s not a very blended eye, but it’s supposed to look as if the girl did it herself,” says Castro. “It’s not about perfection; the edges are a little bit blurry, and that’s ok. It looks more real.”

To counterbalance the strong, opaque eye, Castro kept skin dewy and flushed, “as if she’s been in the sun for a few days.” Using Le Métier de Beauté Creme Fresh Tint in Zinnia, he applied the sheer hot pink hue high on the cheekbone, close to the eyes and nose, as well as on the lips (“It has sort of a monochromatic feel to it,” he says).” He then loaded on a nude shimmer powder, Le Métier de Beauté Whisper Rouge Blush, not just on the high points of the face like the chin, on top of the cheekbones and down the bridge of the nose, but more prodigiously, like under the eyes, to impart a glistening, angelic feel. “The interesting part of this look is it’s really universal,” says Castro. “You can have very, very fair skin or very tan skin, and the look would really translate.” 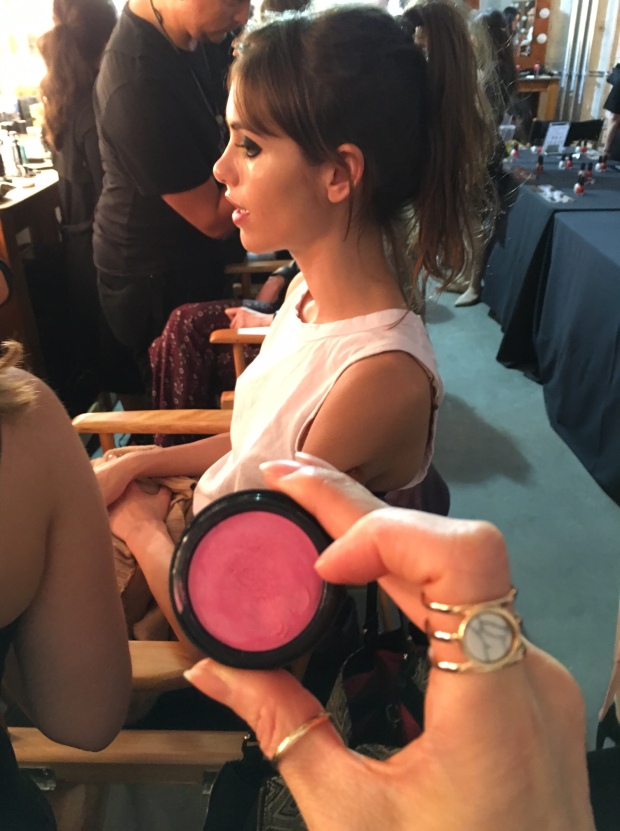 Le Métier de Beauté’s cream blush in zinnia, perfect for cheeks and lips — and I think my next favorite multi-tasker.

And as is becoming more and more common backstage at runway shows, models were treated to a mini facial before makeup artists went to work. “Skin care is really important; it’s just as important as fabulous makeup,” says Castro. “I think that’s why you see a lot more facialists backstage, because it really elevates the way the makeup looks. Especially if the model has come from a different show or stayed out late, or they’ve flown and they’ve just gotten here. It’s a great way of reviving the skin and and getting the circulation going.”

In this case, Anastasia Feklova, National Esthetician for Le Métier de Beauté, was on hand to massage, plump and rejuvenate models’ skin before they headed to the makeup chair. Some were lucky and got a Glow Mask, an antioxidant, vitamin-rich peel-off mask. Then Feklova applied Le Métier de Beauté’s newest product, Vital ET Recovery Boost, a serum with three kinds of vitamin E. “A lot of girls, because they use so much makeup on a daily basis for their jobs, they have a little bit of sensitivity or dehydration,” says Feklova. “This product will instantly soothe and calm their skin if there’s any inflammation or irritation, and give them a beautiful, nice, healthy glow.”

For those who needed a little more moisture, Feklova applied Instant Line Perfecting Serum (“Kind of our liquid Botox,” she says) and then Replenishing Daily Solution, a emollient cream for a dewy, soft focus look.

After makeup, models went straight to hair, where they got what may be the coolest look perfect for Coachella, courtesy of celebrity hairstylist Paul Norton and Joico: the tinted hair headband.

“I like the effect a lot,” says Norton about Joico’s new InstaTint temporary color shimmer sprays, a pigment-packed product that washes out with a single shampoo. “It’s really fun. It’s great for festival season; it’s great for young people in general. Anyone who doesn’t wanna commit to permanent color, it’s a fantastic solution.”

To achieve the fun look, Norton first prepped dry hair with Joico Iron Clad Thermal Protection Spray to add grip. After parting hair to the side or slightly off-center, he curled 2-inch sections for a tousled, undone texture. He then sprayed the entire head with Joico Hair Shake, a liquid-to-powder texturizer, and combed through with his fingers. Separating out 2-inch sections of hair from underneath the crown of the head, just above each ear, Norton then sprayed them either an orchid, pink or coral shade. After blowing dry to bring out the vibrant color, he braided each section loosely, backcombing the ends rather than tying with an elastic. He next criss-crossed the two sections over the top of the head, like a headband, and pinned the two pieces in place. The rest of the hair he kept raw, with natural texture, curling chunky pieces with a curling iron.

The tinted hair headband a little too intimidating? Try the tinted side braid. Photo by John Sciulli/Getty Images for Joico.

Norton swears this is a look anyone can do, but if you feel a tad intimidated by the tinted braid headband, try some of the other looks he created for the show: a loose side braid or a pigtail with tiny braids, each with strategic hits of tint, or a tousled look with tiny tinted braids peeking out from underneath. Either way, now’s the time to try these creative looks. “Feeling free,” says Norton about the inspiration for the looks. “I think summertime always brings that out in people. This season is the perfect time to express that. Throw caution to the wind, and you can be outrageous.”

Of course, even the most non-outrageous among us can pull off a cool nail look. Check out the show’s nail look created by Miss Pop, lead manicurist for China Glaze Nail Lacquer.

Steps to get the look:

Adapted from a story written by me, originally published in Composuremagazine.com. 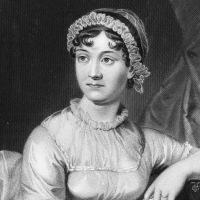 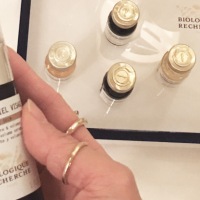